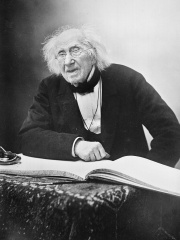 Michel Eugène Chevreul (31 August 1786 – 9 April 1889) was a French chemist whose work influenced several areas in science, medicine, and art. His early work with animal fats revolutionized the manufacture of soap and of candles and led to his isolation of the heptadecanoic (margaric), stearic, and oleic fatty acids. In the medical field, he was first to demonstrate that diabetics excrete glucose in the urine and to isolate creatine. Read more on Wikipedia

Michel Eugène Chevreul was a French chemist and physicist. He is most famous for his work on the optical properties of color.

Among people born in 1786, Michel Eugène Chevreul ranks 9. Before him are Wilhelm Grimm, Christian VIII of Denmark, Ludwig I of Bavaria, François Arago, Princess Victoria of Saxe-Coburg-Saalfeld, and Marie Walewska. After him are Sophie of France, John Franklin, Davy Crockett, Grand Duchess Maria Pavlovna of Russia, Friedrich Kuhlau, and Charles, Grand Duke of Baden. Among people deceased in 1889, Michel Eugène Chevreul ranks 8. Before him are Rudolf, Crown Prince of Austria, Antonio Meucci, Jefferson Davis, Alexandre Cabanel, Baroness Mary Vetsera, and Father Damien. After him are Mihai Eminescu, Nikolay Chernyshevsky, Luís I of Portugal, Wilkie Collins, Charles III, Prince of Monaco, and Marie of Prussia.