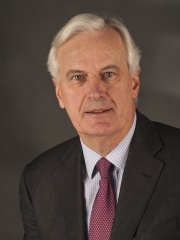 Michel Barnier (born 9 January 1951) is a French politician who served as the European Commission's Head of Task Force for Relations with the United Kingdom (UK Task Force/UKTF) from 2019 to 2021. He previously served as Chief Negotiator, Task Force for the Preparation and Conduct of the Negotiations with the United Kingdom under Article 50 TEU (Task Force 50/TF50) from October 2016 to November 2019.He has served in several French cabinet positions including Minister of Agriculture and Fisheries from 2007 to 2009, Minister of Foreign Affairs from 2004 to 2005, Minister of State for European Affairs from 1995 to 1997 and minister of the environment and way of life from 1993 to 1995. He served at European level as European Commissioner for Regional Policy from 1999 to 2004 and European Commissioner for Internal Market and Services from 2010 to 2014. Read more on Wikipedia

Among politicians, Michel Barnier ranks 8,054 out of 15,710. Before him are Yusof Ishak, Iuliu Maniu, Anne Lister, Herleva, Leopold, Prince of Anhalt-Köthen, and Pierre Pflimlin. After him are Sekhemre Khutawy Sobekhotep, Lucius Verginius Rufus, Marco Barbarigo, Alara of Nubia, Enrique Líster, and Pierre Séguier.