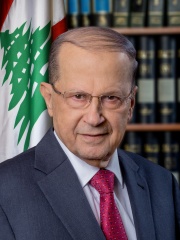 Michel Naim Aoun (Arabic: ميشال نعيم عون Lebanese Arabic: [miˈʃɛl naˈʕiːm ʕaʊ̯n]; born 30 September 1933) is a Lebanese politician and former military general who has served as the President of Lebanon since 31 October 2016. Born in Haret Hreik to a Maronite Christian family, Aoun joined the Military Academy in 1955 and graduated as an artillery officer in the Lebanese Army. In 1984, he became the youngest Commander of the Army, at the age of 49 years. Read more on Wikipedia

Michel Aoun is a Lebanese politician who was elected president of Lebanon in 1998. He is also the founder of the Free Patriotic Movement.

Among politicians, Michel Aoun ranks 1,221 out of 15,577. Before him are Felix Yusupov, Emir Abdelkader, Lentulus Batiatus, Khalid of Saudi Arabia, Constantine X Doukas, and Napoléon Louis Bonaparte. After him are Zachary Taylor, 2nd Dalai Lama, Friedrich Fromm, Abu Ubaidah ibn al-Jarrah, Carloman I, and Frederick I of Sweden.