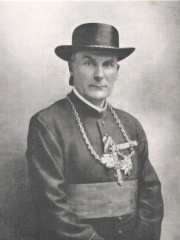 Michael Cardinal Ritter von Faulhaber (5 March 1869 – 12 June 1952) was a German Catholic prelate who served as Archbishop of Munich for 35 years, from 1917 to his death in 1952. Created Cardinal in 1921, von Faulhaber criticized the Weimar Republic as rooted in treason in a speech at the 62nd German Catholics' Day of 1922. Cardinal von Faulhaber was a leading member and co-founder of the Amici Israel, a priestly association founded in Rome in 1926 with the goal of advocating Jewish-Christian reconciliation.After the Nazi Party seized control of German government in 1933, Cardinal von Faulhaber recognized the new Nazi government as legitimate, required Catholic clergy to be loyal to the government and maintained diplomatic bridges between the regime and the Church, while simultaneously condemning certain Nazi policies, including persecution of members of the clergy, and actively supporting Catholic regime critics such as Fritz Gerlich and other persecuted persons. Read more on Wikipedia

Among religious figures, Michael von Faulhaber ranks 1,437 out of 2,238. Before him are Gregory Peter XX Ghabroyan, Soga no Umako, Eutychius of Constantinople, Jianzhen, Clare of Montefalco, and Pope Avilius of Alexandria. After him are Catherine of Ricci, Angilbert, Dionigi Tettamanzi, Anatolius of Constantinople, Hōnen, and Bernard Francis Law.