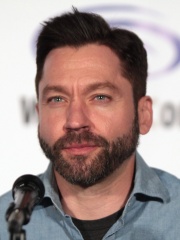 Michael Weston (born Michael Rubinstein; October 25, 1973) is an American television and film actor. His best-known roles are the private detective Lucas Douglas on House, the deranged and sadistic kidnapper Jake in the HBO drama Six Feet Under and Pvt. Read more on Wikipedia

Since 2007, the English Wikipedia page of Michael Weston has received more than 679,149 page views. His biography is available in 20 different languages on Wikipedia making him the 7,015th most popular actor.