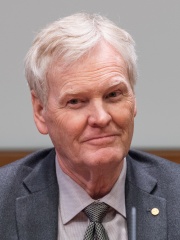 Michael Warren Young (born March 28, 1949) is an American biologist and geneticist. He has dedicated over three decades to research studying genetically controlled patterns of sleep and wakefulness within Drosophila melanogaster.At Rockefeller University, his lab has made significant contributions in the field of chronobiology by identifying key genes associated with regulation of the internal clock responsible for circadian rhythms. He was able to elucidate the function of the period gene, which is necessary for the fly to exhibit normal sleep cycles. Read more on Wikipedia

Since 2007, the English Wikipedia page of Michael W. Young has received more than 187,085 page views. His biography is available in 34 different languages on Wikipedia making him the 287th most popular biologist.