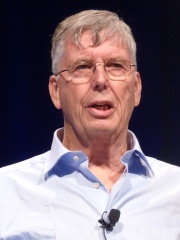 Michael Ralph Stonebraker (born October 11, 1943) is a computer scientist specializing in database systems. Through a series of academic prototypes and commercial startups, Stonebraker's research and products are central to many relational databases. He is also the founder of many database companies, including Ingres Corporation, Illustra, Paradigm4, StreamBase Systems, Tamr, Vertica and VoltDB, and served as chief technical officer of Informix. For his contributions to database research, Stonebraker received the 2014 Turing Award, often described as "the Nobel Prize for computing."Stonebraker's career can be broadly divided into two phases: his time at University of California, Berkeley when he focused on relational database management systems such as Ingres and Postgres, and at Massachusetts Institute of Technology (MIT) where he developed more novel data management techniques such as C-Store, H-Store and SciDB. Read more on Wikipedia