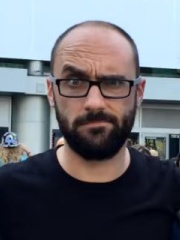 Michael David Stevens (born January 23, 1986) is an American educator, public speaker, comedian, entertainer, editor, and internet celebrity, best known for creating and hosting the popular education YouTube channel Vsauce. His channel initially released video game-related content until the popularity of his educational series DOT saw discussions of general interest become the focus of Vsauce, encompassing explanations of science, philosophy, culture, and illusion.As the host of Vsauce, Stevens has become one of the most successful YouTubers (with over 14 million subscribers and 1.63 billion views), as well as a leading figure in the internet-driven popularization of science and education. Read more on Wikipedia

Since 2007, the English Wikipedia page of Michael Stevens has received more than 160,120 page views. His biography is available in 17 different languages on Wikipedia making him the 7th most popular youtuber.

Among youtubers, Michael Stevens ranks 10 out of 13. Before him are Daniel Howell, Pat Condell, Shane Dawson, Marzia Bisognin, Markiplier, and Jenna Marbles. After him are Zoella, Ryan Higa, KSI, Phil Lester, Lucas Cruikshank, and Jake Paul.