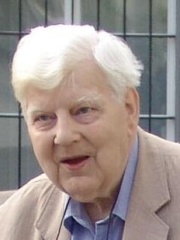 Sir Michael Anthony Eardley Dummett (1925–2011) was an English academic described as "among the most significant British philosophers of the last century and a leading campaigner for racial tolerance and equality." He was, until 1992, Wykeham Professor of Logic at the University of Oxford. He wrote on the history of analytic philosophy, notably as an interpreter of Frege, and made original contributions particularly in the philosophies of mathematics, logic, language and metaphysics. He was known for his work on truth and meaning and their implications to debates between realism and anti-realism, a term he helped to popularize. Read more on Wikipedia

Since 2007, the English Wikipedia page of Michael Dummett has received more than 196,349 page views. His biography is available in 29 different languages on Wikipedia making him the 796th most popular philosopher.