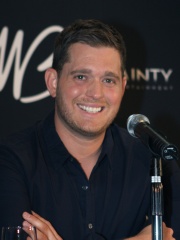 Michael Steven Bublé (IPA: boo-BLAY; born September 9, 1975) is a Croatian-Canadian singer, songwriter, and record producer. His first album reached the top ten in Canada and the United Kingdom. He found a worldwide audience with his 2005 album It's Time and his 2007 album Call Me Irresponsible – which reached number one on the Canadian Albums Chart, the UK Albums Chart, the US Billboard 200, the Australian ARIA Albums Chart and several European charts. Read more on Wikipedia

Among singers, Michael Bublé ranks 813 out of 3,541. Before him are Ingvar Wixell, Vanilla Ice, Sami Yusuf, Riccardo Fogli, Dr. John, and Gregg Allman. After him are The Weeknd, Phil Anselmo, Dennis Frederiksen, Lightnin' Hopkins, Guy Béart, and Elaine Paige.