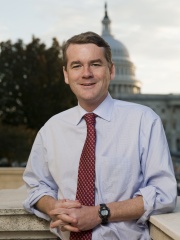 Michael Farrand Bennet (born November 28, 1964) is an American businessman, lawyer, and politician who has served as the senior United States Senator from Colorado since 2009. A member of the Democratic Party, he was appointed to the seat when Senator Ken Salazar became Secretary of the Interior. Bennet previously worked as a managing director for the Anschutz Investment Company, chief of staff to Denver Mayor John Hickenlooper, and Superintendent of Denver Public Schools. Bennet is the son of Douglas J. Read more on Wikipedia

Since 2007, the English Wikipedia page of Michael Bennet has received more than 1,739,897 page views. His biography is available in 24 different languages on Wikipedia making him the 14,097th most popular politician.