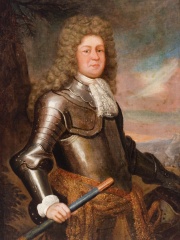 Michael I (Polish: Michał Korybut Wiśniowiecki, Lithuanian: Mykolas I Kaributas Višnioveckis; 31 May 1640 – 10 November 1673) was the ruler of the Polish–Lithuanian Commonwealth as King of Poland and Grand Duke of Lithuania from 29 September 1669 until his death in 1673.Chosen partly because of the merit of his father, prince Jeremi Wiśniowiecki, a powerful border magnate who had helped suppress the Cossacks in eastern Poland during the Khmelnytsky Uprising. Read more on Wikipedia

Michał Korybut Wiśniowiecki was a Polish military commander and nobleman. He was one of the most successful military commanders in the history of Poland, and was the first person to hold the position of the Grand Crown Hetman. He is most famous for being the father of King John III Sobieski, who led the Polish forces to victory over the Ottoman Empire in the Battle of Vienna.

Among politicians, Michał Korybut Wiśniowiecki ranks 3,246 out of 15,710. Before him are Prince Paul of Yugoslavia, Magnus II of Sweden, Manco Inca Yupanqui, Inge the Younger, Mohammad Shah Qajar, and Candaules. After him are James Macpherson, Philip III of Navarre, Lluís Llach, Charles Emmanuel II, Duke of Savoy, Georges Ernest Boulanger, and Richard I of Normandy.