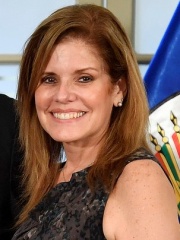 Mercedes Rosalba Aráoz Fernández (born 5 August 1961) is a Peruvian economist, professor, and politician who served as Second Vice President of Peru from 2016 to 2020. At the beginning of her political career, she served as Minister of Foreign Trade and Tourism from 2006 to July 2009, after which she was appointed briefly as Minister of Production, and finally as Minister of Economy and Finance, all portfolios under the second presidency of Alan García.At the 2016 general election, Aráoz ran for the Second Vice Presidency along Pedro Pablo Kuczynski and Martin Vizcarra in the Peruvians for Change ticket, being ultimately elected in a tight run-off against Keiko Fujimori's Popular Force ticket. Simultaneously, she was elected to Congress for the 2016–2021 term. Read more on Wikipedia