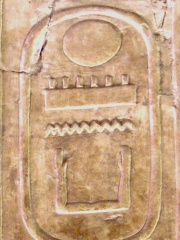 Menkare was an ancient Egyptian pharaoh, the first or second ruler of the Eighth Dynasty. Menkare probably reigned a short time at the transition between the Old Kingdom period and the First Intermediate Period, in the early 22nd century BC. The rapid succession of brief reigns at the time suggests times of hardship, possibly related to a widespread aridification of the Middle East, known as the 4.2 kiloyear event. Read more on Wikipedia

Page views of Menkares by language

Among politicians, Menkare ranks 6,883 out of 15,710. Before him are Princess Margaret Yolande of Savoy, Zénaïde Bonaparte, Agron, Albert I, Duke of Saxony, Janusz Korwin-Mikke, and Princess Françoise of Orléans. After him are Lamberto Dini, Shukri al-Quwatli, T. V. Soong, Louis Botha, Nikita Ivanovich Panin, and Guðni Th. Jóhannesson.