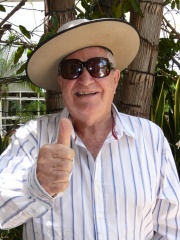 Menahem Golan (Hebrew: מנחם גולן; May 31, 1929 – August 8, 2014, originally Menachem Globus) was an Israeli film producer, screenwriter, and director. He was best known for co-owning The Cannon Group with his cousin Yoram Globus. Cannon specialized in producing low-to-mid-budget American films, primarily Genre films, during the 1980s after Golan and Globus had achieved significant filmmaking success in their native Israel during the 1970s.Golan produced movies featuring actors such as Sean Connery, Sylvester Stallone, Chuck Norris, Jean-Claude Van Damme, and Charles Bronson, and for a period, was known as a producer of comic book-style movies like Masters of the Universe, Superman IV: The Quest for Peace, Captain America, and his aborted attempt to bring Spider-Man to the silver screen. Read more on Wikipedia

Among FILM DIRECTORS In Israel