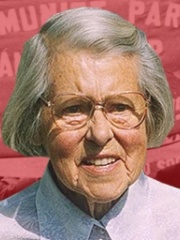 Melita Stedman Norwood (née Sirnis; 25 March 1912 – 2 June 2005) was a British civil servant, Communist Party of Great Britain member and KGB illegal agent. Born to a British mother and Latvian father, Norwood is most famous for supplying the Soviet Union with state secrets concerning the development of atomic weapons from her job at the British Non-Ferrous Metals Research Association, where she worked for 40 years. Despite the high strategic value of the information she passed to the Soviets, she refused to accept any financial rewards for her work. She rejected the Soviets' offer of a pension, and argued that her disclosures of classified work helped to avoid the possibility of a third world war involving the United States, Britain, and the Soviet Union.In The Mitrokhin Archive: The K.G.B. Read more on Wikipedia