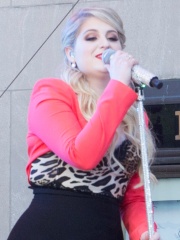 Meghan Elizabeth Trainor (born December 22, 1993) is an American singer-songwriter and television personality. She rose to prominence after signing with Epic Records in 2014 and releasing her debut single "All About That Bass", which reached number one on the U.S. Billboard Hot 100 chart and sold 11 million copies worldwide. Read more on Wikipedia

Among musicians, Meghan Trainor ranks 2,332 out of 2,662. Before her are Hallucinogen, Lost Frequencies, Tom Robinson, Shagrath, Joey Santiago, and John Otto. After her are Deadmau5, Leon Wilkeson, Edward Maya, Natalie Merchant, Mikael Stanne, and Alex Webster.