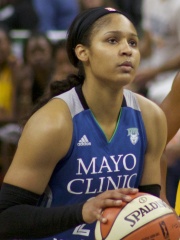 Maya April Moore (born June 11, 1989) is an American professional basketball player for the Minnesota Lynx of the Women's National Basketball Association (WNBA) who is on sabbatical. Naming her their inaugural Performer of the Year in 2017, Sports Illustrated called Moore the greatest winner in the history of women's basketball.In high school, Moore was the National Gatorade Player of the Year, the Gatorade Female Athlete of the Year, and a McDonald's All-American. She played forward for the UConn women's basketball team and won back to back national championships in 2009 and 2010. Read more on Wikipedia

Since 2007, the English Wikipedia page of Maya Moore has received more than 1,690,241 page views. Her biography is available in 18 different languages on Wikipedia making her the 870th most popular basketball player.