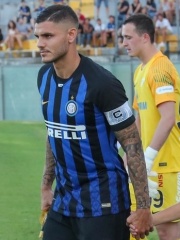 Mauro Emanuel Icardi (Spanish pronunciation: [ˈmawɾo emaˈnwel iˈkaɾði]; born 19 February 1993) is an Argentine professional footballer who plays as a striker for Ligue 1 club Paris Saint-Germain and the Argentina national team. Icardi began his footballing career at La Masia, the youth system of La Liga club Barcelona, before moving to Serie A club Sampdoria to begin his professional career in 2012; after an impressive season, he joined Inter Milan in July 2013, where he developed into one of the most prolific strikers in Europe. Icardi won the Capocannoniere in both the 2014–15 and 2017–18 seasons, and was named the captain of Inter in 2015, at age 22. Read more on Wikipedia