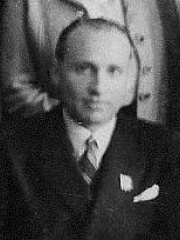 Maurice Papon (French pronunciation: ​[mɔʁis papɔ̃, moʁ-]; 3 September 1910 – 17 February 2007) was a French civil servant who led the police in major prefectures from the 1930s to the 1960s, before he became a Gaullist politician. When he was secretary general for the police in Bordeaux during World War II, he participated in the deportation of more than 1600 Jews. He is also known for his activities in the Algerian War (1954–1962), during which he tortured insurgent prisoners as prefect of the Constantinois department, and ordered, as prefect of the Paris police, the severe repression of a pro-National Liberation Front (FLN) demonstration against a curfew that he had "advised." In 1961, Maurice Papon was personally awarded the Legion of Honour by French President Charles de Gaulle, whose government had been struggling with the FLN insurgency. Read more on Wikipedia

Among politicians, Maurice Papon ranks 6,820 out of 15,710. Before him are Yevgeni Preobrazhensky, Marcus Livius Drusus, Quintus Lutatius Catulus, Lew Wallace, Archduchess Maria Theresa of Austria, and Margaret of Foix. After him are Chilperic of Aquitaine, Ibzan, Gonzalo Sánchez de Lozada, Américo Tomás, Orso Ipato, and Aldona of Lithuania.