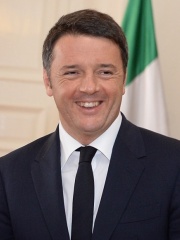 Matteo Renzi (Italian pronunciation: [matˈtɛːo ˈrɛntsi]; born 11 January 1975) is an Italian politician who served as the Prime Minister of Italy from February 2014 until December 2016. He has been an Italian Senator for Florence since 2018.After serving as the President of the Province of Florence from 2004 to 2009 and the Mayor of Florence from 2009 to 2014, Renzi was elected Secretary of the Democratic Party, holding this role from 2013 to 2018, with a brief interruption in 2017. He resigned as Party Secretary following defeat in the 2018 election. Read more on Wikipedia

Since 2007, the English Wikipedia page of Matteo Renzi has received more than 1,909,636 page views. His biography is available in 82 different languages on Wikipedia making him the 8,639th most popular politician.

Among politicians, Matteo Renzi ranks 8,593 out of 14,801. Before him are Masaniello, Pōmare I, Mithridates IV of Pontus, Väinö Tanner, Ludmilla Tourischeva, and Cristóbal Mendoza. After him are Roch Marc Christian Kaboré, Adrien Maurice de Noailles, Francisco Guterres, Caspar Bartholin the Younger, Mutnofret, and Urraca Fernández.