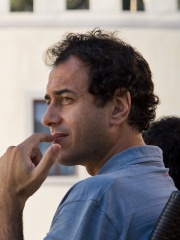 Matteo Garrone (born 15 October 1968) is an Italian filmmaker. Born in Rome, the son of a theatre critic, Nico Garrone and a photographer, in 1996 Garrone won the Sacher d'Oro, an award sponsored by Nanni Moretti, with the short film Silhouette, that became one of the three episodes that are on his first long feature, Terra di Mezzo in 1997. He won Best Director at the European Film Awards and at the David di Donatello Awards for Gomorrah. Read more on Wikipedia

Since 2007, the English Wikipedia page of Matteo Garrone has received more than 186,204 page views. His biography is available in 20 different languages on Wikipedia making him the 986th most popular film director.