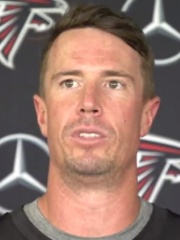 Matthew Thomas Ryan (born May 17, 1985) is an American football quarterback for the Atlanta Falcons of the National Football League (NFL). After playing college football for Boston College, Ryan was drafted by the Falcons with the third overall pick in the first round of the 2008 NFL Draft. Ryan was Boston College's starting quarterback from 2005 to 2007, leading them to three bowl victories and a 25–7 record in 32 starts. Read more on Wikipedia

Since 2007, the English Wikipedia page of Matt Ryan has received more than 730,215 page views. Her biography is available in 16 different languages on Wikipedia making her the 37th most popular american football player.