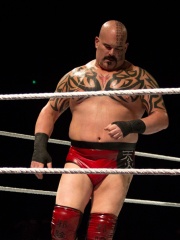 Matthew Jason Bloom (born November 14, 1972) is an American retired wrestling trainer, color commentator, retired professional wrestler, and former National Football League player. He is currently employed by WWE, where he is the head trainer at the WWE Performance Center in Orlando, Florida. Bloom is best known for his in-ring appearances with WWE as Prince Albert, Albert and A-Train from 1999 to 2004, and as Lord Tensai and Tensai from 2012 to 2014, as well as for his appearances in Japan from 2005 to 2012 with All Japan Pro Wrestling (AJPW), New Japan Pro-Wrestling (NJPW) and Pro Wrestling Noah (Noah) as Giant Bernard (ジャイアント・バーナード, Jaianto Bānādo). Read more on Wikipedia

Since 2007, the English Wikipedia page of Matt Bloom has received more than 1,378,825 page views. His biography is available in 24 different languages on Wikipedia making him the 235th most popular wrestler.