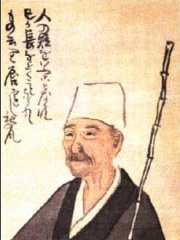 Matsuo Bashō, (松尾 芭蕉, 1644 – November 28, 1694) born Matsuo Kinsaku, (松尾 金作) then Matsuo Chūemon Munefusa, (松尾 忠右衛門 宗房) was the most famous poet of the Edo period in Japan. During his lifetime, Bashō was recognized for his works in the collaborative haikai no renga form; today, after centuries of commentary, he is recognized as the greatest master of haiku (then called hokku). He is also well known for his travel essays beginning with Records of a Weather-Exposed Skeleton (1684), written after his journey west to Kyoto and Nara. Read more on Wikipedia

Matsuo Bashō is most famous for his work "Oku no Hosomichi" which is a travelogue of his journey through Japan.

Among writers, Matsuo Bashō ranks 66 out of 5,794. Before him are Sappho, Maxim Gorky, Umberto Eco, Lord Byron, Aeschylus, and Arthur Rimbaud. After him are Rabindranath Tagore, Ayn Rand, Hesiod, Li Bai, Pablo Neruda, and Charles Perrault.