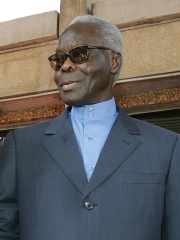 Mathieu Kérékou (French pronunciation: ​[ma.tjø ke.ʁe.ku]) (2 September 1933 – 14 October 2015) was a Beninese politician who served as President of Benin from 1972 to 1991 and again from 1996 to 2006. After seizing power in a military coup, he ruled the country for 19 years, for most of that time under an officially Marxist–Leninist ideology, before he was stripped of his powers by the National Conference of 1990. Read more on Wikipedia

Since 2007, the English Wikipedia page of Mathieu Kérékou has received more than 222,496 page views. His biography is available in 46 different languages on Wikipedia making him the 3,587th most popular politician.

Among politicians, Mathieu Kérékou ranks 3,565 out of 14,801. Before him are Onjo of Baekje, Isabella de' Medici, Yevgeny Primakov, Jonathan Apphus, Gülnuş Sultan, and Yelü Dashi. After him are William I, Duke of Aquitaine, Pedro Pires, Nobusuke Kishi, Vladimir Zhirinovsky, Marie of Prussia, and Grand Duke Nicholas Nikolaevich of Russia.