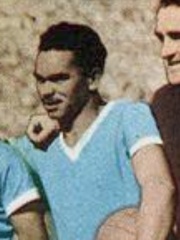 Matías González (6 August 1925 in Artigas – 12 May 1984) was a Uruguayan footballer, who played for C.A. Cerro. For the Uruguay national football team, he was part of the 1950 FIFA World Cup winning team, and he played in all four of Uruguay's matches in the tournament. Read more on Wikipedia

Since 2007, the English Wikipedia page of Matías González has received more than 8,878 page views. Her biography is available in 20 different languages on Wikipedia making her the 1,165th most popular soccer player.