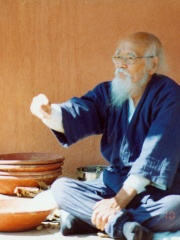 Masanobu Fukuoka (Japanese: 福岡 正信, Hepburn: Fukuoka Masanobu, 2 February 1913 – 16 August 2008) was a Japanese farmer and philosopher celebrated for his natural farming and re-vegetation of desertified lands. He was a proponent of no-till, herbicide and pesticide free cultivation methods from which he created a particular method of agriculture, commonly referred to as "natural farming" or "do-nothing farming".Fukuoka was the author of several books, scientific papers and other publications, and was featured in television documentaries and interviews from the 1970s onwards. His influences went beyond farming to inspire individuals within the natural food and lifestyle movements. Read more on Wikipedia

Masanobu Fukuoka is most famous for his book "The One-Straw Revolution" in which he explains his philosophy of natural farming. He believes that the most effective way to farm is to create a system that mimics nature.