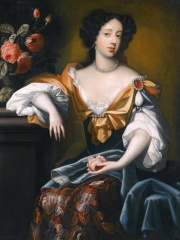 Mary of Modena (Italian: Maria Beatrice Eleonora Anna Margherita Isabella d'Este, or Maria di Modena; 5 October [O.S. 25 September] 1658 – 7 May [O.S. 26 April] 1718) was Queen of England, Scotland, and Ireland as the second wife of James II and VII (1633–1701). A devout Roman Catholic, Mary married the widower James, who was then the younger brother and heir presumptive of Charles II (1630–1685). She was uninterested in politics and devoted to James and their children, two of whom survived to adulthood: the Jacobite claimant to the thrones, James Francis Edward, and Louisa Maria Teresa.Born a princess of the northwestern Italian Duchy of Modena, Mary is primarily remembered for the controversial birth of James Francis Edward, her only surviving son. Read more on Wikipedia

Mary of Modena was the wife of James II and the daughter of the Duke of Modena. She is most famous for being the mother of James Francis Edward Stuart, who became known as the Old Pretender.

Page views of Mary of Modenas by language

Among companions, Mary of Modena ranks 266 out of 687. Before her are Tuya, Maria Isabel of Braganza, Alexandra of Yugoslavia, Marie of Brabant, Queen of France, Jabir ibn Abd Allah, and Catherine Opalińska. After her are Domitia Longina, Nazli Sabri, Juana Enríquez, Margaret of France, Queen of England and Hungary, Clarice Orsini, and Jeanne d'Évreux.