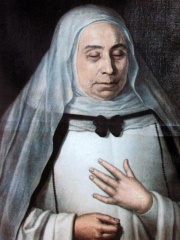 Mary of Jesus de León y Delgado (Spanish: Sor María de Jesús), was a Spanish Dominican lay sister, mystic and visionary, known popularly as "La Siervita" (the Little Servant). She lived a life which was austere and simple, and many miracles were attributed to her, as well as levitation, ecstasy, bilocation, the stigmata, clairvoyance and healing, among others. De León died with a reputation for sanctity and is one of the most revered of the natives of the Canary Islands, together with Peter of Saint Joseph Betancur and José de Anchieta. Read more on Wikipedia

Mary of Jesus de León y Delgado is most famous for being the founder of the Congregation of the Sisters of Saint Joseph of the Third Order of St. Francis, a religious order of nuns that she founded in 1872.

Among religious figures, Mary of Jesus de León y Delgado ranks 830 out of 2,272. Before her are Bruno of Querfurt, Al-Bayhaqi, Angela of Foligno, Menachem Mendel Schneerson, Carlos Filipe Ximenes Belo, and Paul of Samosata. After her are Giuseppe Moscati, Hermenegild, Stanislaus Kostka, Leonardo Boff, Heinrich Bullinger, and Odile of Alsace.