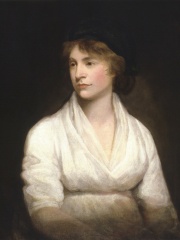 Mary Wollstonecraft is most famous for her book, "A Vindication of the Rights of Woman." The book argued that women should be given the same opportunities as men.

Among people born in 1759, Mary Wollstonecraft ranks 4. Before her are Friedrich Schiller, Georges Danton, and Joseph Fouché. After her are Maria Feodorovna, Robert Burns, Victor Emmanuel I of Sardinia, William Wilberforce, William Pitt the Younger, Clotilde of France, Hedvig Elisabeth Charlotte of Holstein-Gottorp, and Maximilian, Hereditary Prince of Saxony. Among people deceased in 1797, Mary Wollstonecraft ranks 3. Before her are Baron Munchausen and Edmund Burke. After her are Frederick William II of Prussia, François-Noël Babeuf, Agha Mohammad Khan Qajar, James Hutton, Elisabeth Christine of Brunswick-Wolfenbüttel-Bevern, Vilna Gaon, Frederick II Eugene, Duke of Württemberg, Lazare Hoche, and Joseph Wright of Derby.