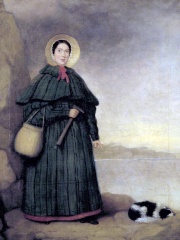 Mary Anning (21 May 1799 – 9 March 1847) was an English fossil collector, dealer, and palaeontologist who became known around the world for the discoveries she made in Jurassic marine fossil beds in the cliffs along the English Channel at Lyme Regis in the county of Dorset in Southwest England. Anning's findings contributed to changes in scientific thinking about prehistoric life and the history of the Earth. Anning searched for fossils in the area's Blue Lias and Charmouth Mudstone cliffs, particularly during the winter months when landslides exposed new fossils that had to be collected quickly before they were lost to the sea. Read more on Wikipedia

Mary Anning was a fossil hunter and paleontologist. She became famous for her discoveries of ichthyosaurus and plesiosaurus fossils.

Among CELEBRITIES In United Kingdom