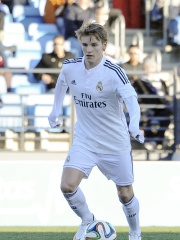 Martin Ødegaard (Norwegian pronunciation: [ˈmɑ̀ʈːɪn ˈø̀ːdəˌɡoːɾ]; born 17 December 1998) is a Norwegian professional footballer who plays as an attacking midfielder for Premier League club Arsenal, on loan from Real Madrid, and the Norway national team. He made his debut for Strømsgodset Toppfotball on 13 April 2014, nearly becoming the youngest player to feature in Tippeligaen, and became its youngest goalscorer somewhere around 16 May. After being a regular part of the team in his first season and training with several foreign clubs, Ødegaard was signed by Real Madrid in January 2015. Read more on Wikipedia

Among SOCCER PLAYERS In Norway