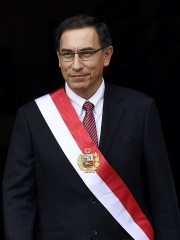 Martín Alberto Vizcarra Cornejo (American Spanish: [maɾˈtin alˈβeɾto βisˈkara koɾˈnexo] (listen); born 22 March 1963) is a Peruvian engineer and politician who served as President of Peru from 2018 to 2020. Vizcarra previously served as Governor of the Department of Moquegua (2011–2014), First Vice President of Peru (2016-2018), Minister of Transport and Communications of Peru (2016–2017), and Ambassador of Peru to Canada (2017–2018), with the latter three during the presidency of Pedro Pablo Kuczynski. Read more on Wikipedia

Among politicians, Martín Vizcarra ranks 8,958 out of 15,710. Before him are Mohammad Beheshti, Mihailo Vojislavljević, Yekuno Amlak, Nergal-ushezib, Vera Kholodnaya, and John II of Cyprus. After him are Lucius Cornelius Balbus, Cyrus Vance, Ibrahim Abboud, Odo I, Count of Orléans, Yahya Jammeh, and Ahmed Zaki Yamani.