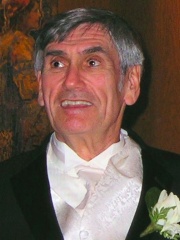 Marshall Bertram Rosenberg (October 6, 1934 – February 7, 2015) was an American psychologist, mediator, author and teacher. Starting in the early 1960s he developed Nonviolent Communication, a process for supporting partnership and resolving conflict within people, in relationships, and in society. He worked worldwide as a peacemaker and in 1984 founded the Center for Nonviolent Communication, an international non-profit organization for which he served as Director of Educational Services. According to his biographer, Marjorie C. Read more on Wikipedia

Since 2007, the English Wikipedia page of Marshall Rosenberg has received more than 315,970 page views. His biography is available in 18 different languages on Wikipedia making him the 1,281st most popular writer.

Among writers, Marshall Rosenberg ranks 1,280 out of 4,883. Before him are Dan Simmons, Per Olov Enquist, Wen Tianxiang, Avienus, Henri Murger, and Thomas Moore. After him are Samuel Pepys, Marie of Cleves, Duchess of Orléans, Edward Albee, Donna Leon, Peter Altenberg, and Martha Gellhorn.