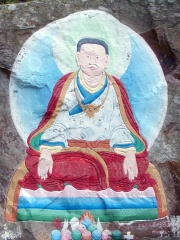 Marpa Lotsāwa (མར་པ་ལོ་ཙཱ་བ་ཆོས་ཀྱི་བློ་གྲོས་, 1012–1097), sometimes known fully as Marpa Chökyi Lodrö (Wylie: mar pa chos kyi blo gros) or commonly as Marpa the Translator (Marpa Lotsāwa), was a Tibetan Buddhist teacher credited with the transmission of many Vajrayana teachings from India, including the teachings and lineages of Mahamudra. Due to this the Kagyu lineage, which he founded, is often called Marpa Kagyu in his honour.Although some accounts relate that the Mahasiddha Naropa was the personal teacher of Marpa, other accounts suggest that Marpa held Naropa's lineage through intermediary disciples only. Read more on Wikipedia

Among philosophers, Marpa Lotsawa ranks 537 out of 1,081. Before him are Al-Baydawi, Dharmakirti, Cesare Ripa, Chaïm Perelman, Crates of Mallus, and Georg Henrik von Wright. After him are Berengar of Tours, Charles W. Morris, Vilém Flusser, Shah Waliullah Dehlawi, Myson of Chenae, and Myia.

Among people born in 1012, Marpa Lotsawa ranks 3. Before him are Pope Benedict IX and Baldwin V, Count of Flanders. After him are García Sánchez III of Pamplona, Abbad II al-Mu'tadid, and Cai Xiang. Among people deceased in 1097, Marpa Lotsawa ranks 1. After him are Anushtegin Gharchai, Berenguer Ramon II, Count of Barcelona, Albert Azzo II, Margrave of Milan, Heonjong of Goryeo, Odo of Bayeux, Petar Snačić, Geoffrey III, Count of Anjou, and Hugh V, Count of Maine.