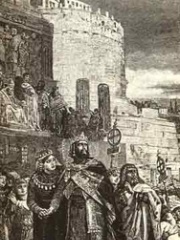 Marozia, born Maria and also known as Mariuccia or Mariozza (c. 890 – 937), was a Roman noblewoman who was the alleged mistress of Pope Sergius III and was given the unprecedented titles senatrix ("senatoress") and patricia of Rome by Pope John X. Edward Gibbon wrote of her that the "influence of two sister prostitutes, Marozia and Theodora was founded on their wealth and beauty, their political and amorous intrigues: the most strenuous of their lovers were rewarded with the Roman tiara, and their reign may have suggested to darker ages the fable of a female pope. The bastard son, two grandsons, two great grandsons, and one great great grandson of Marozia—a rare genealogy—were seated in the Chair of St. Read more on Wikipedia

Marozia was the mother of Pope John XI and the mistress of Pope Sergius III. She was most famous for her incestuous relationship with her son and her involvement in the murders of Pope John X and Pope Benedict VI.

Page views of Marozias by language

Among politicians, Marozia ranks 1,762 out of 15,710. Before her are Kamose, Oruç Reis, Pyotr Stolypin, Ernest I, Duke of Saxe-Coburg and Gotha, Ma Chao, and Joannes. After her are Herman Van Rompuy, Louis II, Prince of Monaco, Cemal Gürsel, Dangun, Emmanuel Philibert, Duke of Savoy, and Pupienus.