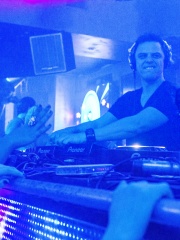 Markus Schulz (; German: [ˈmaʁkʊs ˈʃʊlts]; born 3 February 1969) is a German-American DJ and music producer based in Miami, Florida. Best known for his weekly radio show titled Global DJ Broadcast that airs on Digitally Imported radio, ah.fm and other online stations, Schulz is also the founder of the label Coldharbour Recordings and Schulz Music Group (SMG), an artist management company that manages rising stars in the industry. In September 2012, Schulz was crowned America's number one DJ by DJ Times.In early 2013, after several spontaneous back-to-back performances, Schulz and Ferry Corsten announced they would be producing and touring together as the new EDM group New World Punx. Read more on Wikipedia