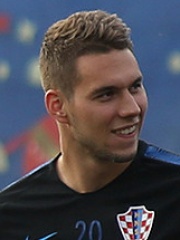 Marko Pjaca (Croatian pronunciation: [mâːrko pjâtsa]; born 6 May 1995) is a Croatian professional footballer who plays as a winger for Serie A club Genoa, on loan from Juventus, and the Croatia national team. Pjaca began his professional club career in Croatia with Lokomotiva in 2012, before moving to Dinamo Zagreb in 2014. After winning consecutive domestic doubles with Dinamo, he joined Juventus in 2016, where he also won a domestic double in his first season. Read more on Wikipedia

Since 2007, the English Wikipedia page of Marko Pjaca has received more than 1,039,193 page views. Her biography is available in 38 different languages on Wikipedia making her the 4,296th most popular soccer player.