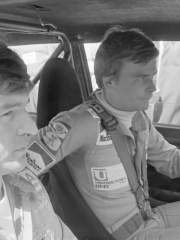 Markku Allan Alén (born 15 February 1951, in Helsinki) is a Finnish former rally and race car driver. He drove for Fiat, Lancia, Subaru and Toyota in the World Rally Championship, and held the record for most stage wins (801) in the series, until Sébastien Loeb overtook it at the 2011 Rally Catalunya. Alén's phrase "now maximum attack" became well-known.Alén never won the world championship itself, despite being for a long time the driver with the most wins to his credit. Read more on Wikipedia

Since 2007, the English Wikipedia page of Markku Alén has received more than 113,512 page views. His biography is available in 23 different languages on Wikipedia making him the 148th most popular racing driver.

Among RACING DRIVERS In Finland