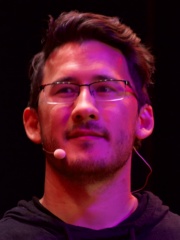 Mark Edward Fischbach (born June 28, 1989), known online as Markiplier, is an American YouTuber, gamer-commentator, actor, and comedian. Originally from Honolulu, Hawaii, he began his career in Cincinnati, Ohio, and is currently based in Los Angeles, California. As of June 2020, his channel has over 13.3 billion total video views and over 26 million subscribers. Read more on Wikipedia

Since 2007, the English Wikipedia page of Markiplier has received more than 4,367,414 page views. His biography is available in 32 different languages on Wikipedia making him the 5th most popular youtuber.

Page views of Markipliers by language

Among youtubers, Markiplier ranks 8 out of 13. Before him are Smosh, Rémi Gaillard, Daniel Howell, Pat Condell, Shane Dawson, and Marzia Bisognin. After him are Jenna Marbles, Michael Stevens, Zoella, Ryan Higa, KSI, and Phil Lester.