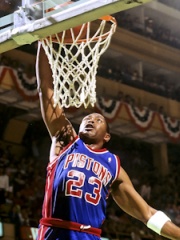 Mark Anthony Aguirre (born December 10, 1959) is an American former basketball player in the National Basketball Association. Aguirre was chosen as the first overall pick of the 1981 NBA draft by the Dallas Mavericks after playing three years at DePaul University. Aguirre played in the NBA from 1981 until 1994 and won two championships with the Detroit Pistons after being traded to Detroit from Dallas in exchange for Adrian Dantley. Read more on Wikipedia

Since 2007, the English Wikipedia page of Mark Aguirre has received more than 571,666 page views. His biography is available in 17 different languages on Wikipedia making him the 301st most popular basketball player.