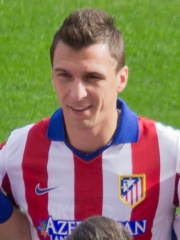 Mario Mandžukić (Croatian pronunciation: [mâːrio mǎndʒukitɕ]; born 21 May 1986) is a Croatian professional footballer who last played as a forward for Qatar Stars League club Al-Duhail. Besides being a prolific goalscorer, he is known for his defensive contribution and aerial power.He started his career in his hometown club Marsonia from where he moved to two Croatian capital city football clubs, first joining NK Zagreb and then signing with Dinamo Zagreb in 2007, where he was Prva HNL top goalscorer in the 2008–09 season. His prolific scoring earned him a transfer to VfL Wolfsburg in 2010. Read more on Wikipedia

Since 2007, the English Wikipedia page of Mario Mandžukić has received more than 3,851,944 page views. His biography is available in 65 different languages on Wikipedia making him the 506th most popular soccer player.