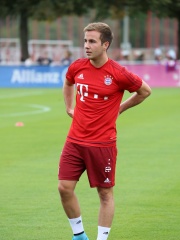 Mario Götze (born 3 June 1992) is a German professional footballer who plays for Bundesliga club Eintracht Frankfurt and the Germany national team. Although his favoured position is that of a playmaker, Götze has also played as a false nine or as an emergency striker.He played for Borussia Dortmund between 2009 and 2013, winning the Bundesliga title in 2010–11 and the Bundesliga and DFB-Pokal double in 2011–12, and was a member of the team which reached the 2013 UEFA Champions League Final. In April 2013, a €37 million bid from Bayern Munich triggered a release clause in Götze's contract, making him the second-most expensive German player at the time, behind Mesut Özil. Read more on Wikipedia