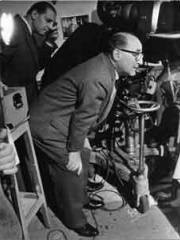 Mario Camerini (6 February 1895 – 4 February 1981) was an Italian film director and screenwriter. The cousin of Augusto Genina, he made the most well-known films in Italy during the 1930s,most of them comedies starring Vittorio De Sica. He directed about 50 films till 1972, among which Ulysses with American stars Kirk Douglas and Anthony Quinn, one of the first Europe/U.S.A. film coproductions. Read more on Wikipedia

Since 2007, the English Wikipedia page of Mario Camerini has received more than 24,130 page views. His biography is available in 16 different languages on Wikipedia making him the 648th most popular film director.

Among film directors, Mario Camerini ranks 650 out of 1,305. Before him are Edgar Reitz, John Farrow, Isabel Coixet, Ann Hui, Lucian Pintilie, and Walter Salles. After him are Stuart Rosenberg, Kiyoshi Kurosawa, Johnnie To, Allan Dwan, David Zucker, and Ivan Pyryev.