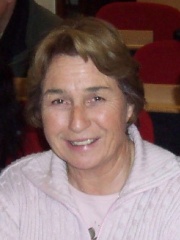 Marielle Goitschel (born 28 September 1945 in Sainte-Maxime) is a former French alpine skier. Marielle is the younger sister of Christine Goitschel, another champion skier of the time, and the aunt of speed skier Philippe Goitschel. After great success in the 1962 World Championships and 1964 Winter Olympics, winning 5 medals including 3 golds, Goitschel was considered the world's best female skier. Read more on Wikipedia

Since 2007, the English Wikipedia page of Marielle Goitschel has received more than 27,234 page views. Her biography is available in 17 different languages on Wikipedia making her the 48th most popular skier.

Most Popular Skiers in Wikipedia