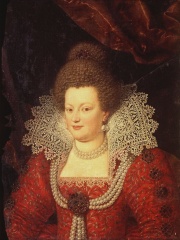 Marie de' Medici (French: Marie de Médicis, Italian: Maria de' Medici; 26 April 1575 – 3 July 1642), was Queen of France as the second wife of King Henry IV of France, of the House of Bourbon and Regent of the Kingdom of France officially during 1610–1614 and de facto until 1617. A member of the powerful House of Medici in the branch of the Grand Dukes of Tuscany, thanks to the wealth of her family, Marie was chosen by Henry IV to become his second wife following his divorce from his previous wife, Margaret of Valois. Read more on Wikipedia

Among noblemen, Marie de' Medici ranks 33 out of 843. Before her are Edward VII, Grand Duchess Olga Nikolaevna of Russia, Charles the Bold, Diana, Princess of Wales, Margaret of Valois, and Alexander Nevsky. After her are Rainier III, Prince of Monaco, Queen Sofía of Spain, Ramesses III, Princess Beatrice of the United Kingdom, Henry IV of England, and Otto von Habsburg.