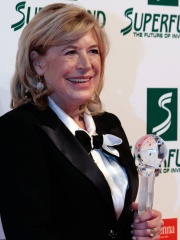 Marianne Evelyn Gabriel Faithfull (born 29 December 1946) is an English singer and actress. She achieved popularity in the 1960s with the release of her hit single "As Tears Go By" and became one of the lead female artists during the British Invasion in the United States. Born in Hampstead, London, Faithfull began her career in 1964 after attending a Rolling Stones party, where she was discovered by Andrew Loog Oldham. Read more on Wikipedia

Marianne Faithfull is most famous for her song "As Tears Go By" and her relationship with Rolling Stones singer Mick Jagger.

Among singers, Marianne Faithfull ranks 62 out of 3,541. Before her are Constanze Mozart, Carlos Gardel, Little Richard, Jennifer Lopez, José Carreras, and Glen Campbell. After her are The Notorious B.I.G., Víctor Jara, Rod Stewart, George Michael, 50 Cent, and Anna Magdalena Bach.