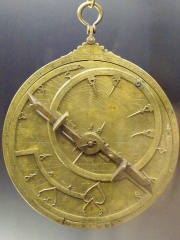 Al-ʻIjliyyah bint al-ʻIjliyy (Arabic: العجلية بنت العجلي) was a 10th-century maker of astrolabes active in Aleppo, in what is now northern Syria.She is sometimes known in modern popular literature as Mariam al-Asṭurlābiyya (Arabic: مريم الأسطرلابي) but her supposed first name 'Mariam' is not mentioned in the only source that we have of her life. Read more on Wikipedia

Among people born in 950, Mariam al-Asturlabi ranks 12. Before her are Maslama al-Majriti, Boleslaus III, Duke of Bohemia, Bernard I, Duke of Saxony, Olof Björnsson, Abhinavagupta, and Sarolt. After her are William I of Provence, Urraca Fernández, Thorvald Asvaldsson, Otto III, Duke of Swabia, Odo I, Count of Blois, and Herman I, Duke of Swabia.

Among ASTRONOMERS In Syria

Among astronomers born in Syria, Mariam al-Asturlabi ranks 2. Before her are Taqi ad-Din Muhammad ibn Ma'ruf (1526).