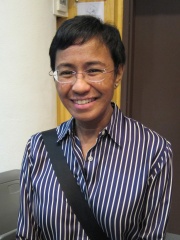 Maria Angelita Ressa (Tagalog pronunciation: [ˈɾesa], born October 2, 1963) is a Filipino-American journalist and author, the co-founder and CEO of Rappler, and the first Filipino Nobel Prize laureate. She previously spent nearly two decades working as a lead investigative reporter in Southeast Asia for CNN. Ressa was included in Time's Person of the Year 2018 as one of a collection of journalists from around the world combating fake news. On February 13, 2019, she was arrested by Philippine authorities for cyberlibel due to accusations that Rappler published a false news story concerning businessman Wilfredo Keng. Read more on Wikipedia

Among JOURNALISTS In Philippines

Among journalists born in Philippines, Maria Ressa ranks 2. Before her are Marcelo H. del Pilar (1850).